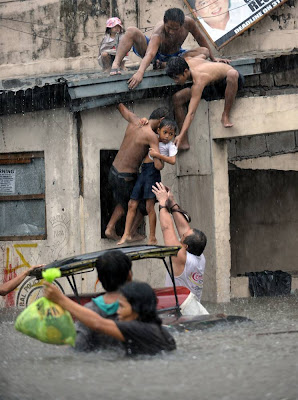 A boy is lifted onto the roof of a building to escape the flooding in the Quezon City suburban of Manila . Nearly a month's worth of rain fell in just six hours Saturday, triggering the worst flooding in the Philippine capital in 42 years, which stranded thousands on rooftops in the city and elsewhere. 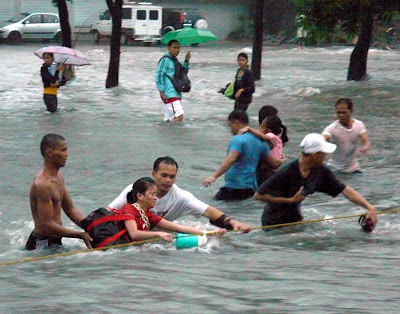 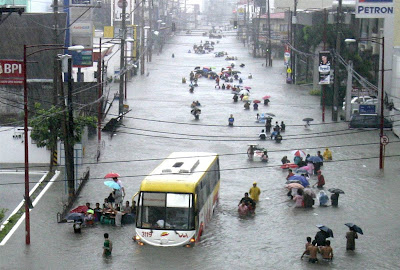 Related
Times Topics: Philippines
Here in the capital, countless people remained on the roofs of their houses, where they had spent the night, drenched and unable to come down because of the floodwaters that had accumulated since the rain began falling Friday evening. The death toll was expected to rise sharply as more reports of casualties came in from provinces outside of Manila.

Tropical Storm Ketsana, packing 53-mile-per-hour winds, dumped nearly 17 inches of rain in just 12 hours, said Nathaniel Cruz, the government’s chief weather forecaster.
Officials said nearly 300,000 people were displaced by the storm; tens of thousands were brought to evacuation centers in schools, churches, gymnasiums and public parks. In Marikina City, a Manila suburb, people pitched tents wherever they could, some on the bridge across the overflowing Marikina River.

The storm “submerged up to 80 percent” of Manila, according to the environmental groupGreenpeace.
“It was terrifying to see the water rising, especially because there were live electrical wires around us,” said Diverson Bloso Jr., a waiter at a restaurant in Quezon City that was one of many flooded businesses. “There were trash and rats and cockroaches all around us.”

King Catoy, a filmmaker, rushed to Marikina City, where he recorded scenes of devastation: streets and houses covered in muck, people washing salvaged belongings in the murky river, a couple holding their five dogs — the only ones left with them after the storm.

“Marikina City always prided itself of being the most orderly, the cleanest and the most prepared city in the whole country,” Mr. Catoy said. Ketsana, he said, “showed that all that may have been just a facade.”
Posted by Faithful Disciples at 10:20 AM

Faithful Disciples
Seek the goodness of every person and encourage people to grow in their personal relationship with our loving God! Like to encounter Christ's love and mercy daily to live our lives to the fullest. Grateful for the people who touch and enrich us.