Dear brothers and sisters in Christ,

May the peace of Christ be always with you. Please allow me to share with everyone our recent experience in the the CFC USA 15th Anniversary Celebration held in Baltimore, Maryland this past weekend.

Our plane left Portland at 6 am Friday, July 3rd and Arcie and myself arrived at the Marriot Hotel at around 4:30 pm. We missed the PRO-LIFE SUMMIT earlier in the afternoon wherein the Keynote Speaker was David Bereit, National Director of 40 Days for Life; but w 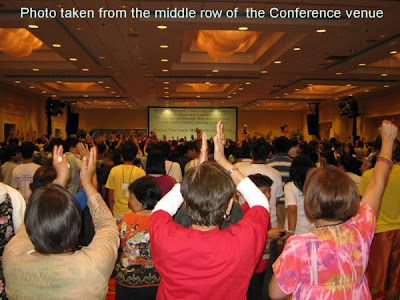 ere able to start our conference with the Eucharistic celebration presided by His Eminence Justin Francis Cardinal Rigali, Archbishop of Philadelphia and the Chairman of the Prolife Committee of the US Conference of Catholic Bishops. Bro Frank Padilla made the Official opening and welcoming remarks and introduced the evening Keynote Speaker who was also Cardinal Rigali. After the closing prayer, the Kids for Family and Life talent show started at 8:30 pm and went on for about an hour. Sometime during the conference, there was a cool artistic dance presentation. What made it really impressive was the full stage video background of an ultrasound with the fetus and the fetal heartbeat. It was announced later on that it was Mary Grace Pinggoy's own womb (Mary Grace is the wife of Ray Pinggoy who leads the US fulltime workers, who helped organize the conference). Ray shared later that he realized that his child was already serving the Lord even while still in the womb!

Saturday started with breakfast at 7 am, Rosary at 7:40 am followed by mass with H.E. Bishop Barry C. Knestout of the Archdiocese of Washington. After the mass, an extremely vibrant praise and worship followed. Bro Frank gave a very inspiring first talk, "God is My Salvation" After his talk, Joe Scheidler, National Director of Pro-Life Action League, who many considers the Father of Prolife activism, spoke about Prolife and CFC's role in it. Then Bro Nani took the stage and asked everyone to take all their check books out for the Evangelization Mission Fund (EMF) which will also help fund our fulltime workers in Latin American countries for the Matrimonios para Cristo. One of the full timers gave his sharing. With Bro Nani's gift for asking money :) and everyone's generous heart, the collection totaled a staggering $32,000 - all in one night! Lunch was served. The 2nd talk, I Will Not Be Afraid was given by Ado Paglinawan. Then the 3rd talk, I Trust as You Walk 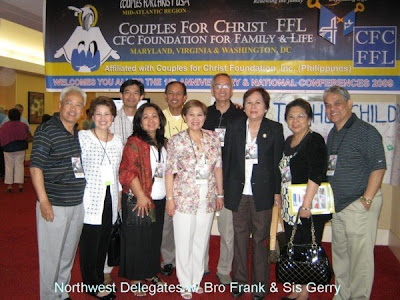 Sunday, it was breakfast, Rosary, then mass with H.E. Archbishop Timothy Broglio, Archbishop for Military Services in the US, followed by praise and worship. The last talk, My Strength and My Courage is the Lord, was given by CFC FFL Chicago Area Director, Orland Dizon. The Conference closed with an overwhelming spirit of joy through a praise fest. Next Year's Conference will be held in New Jersey.

Baltimore was about 45 minutes drive to Washington DC so we took the opportunity and drove to DC Monday morning with Bro Medel and Sis Marlyn. Took some photos of the National Capitol and Washington Monument. But the best experience was when we were able to visit the Basilica of the National Shrine of the Immaculate Conception. Sis Bing mentioned the place the day before (a Divine call). Pope Benedict spoke to the US Catholic Bishops at this Shrine during his April 16th visit in the US (photo of papal chair attached). Our original plan was to go to the Basilica first and then other places but the Lord didn't want it that way and boy did I realize how He planned our trip for us, although it really seemed at one time that we were already lost. Before we headed to DC, I printed out a google direction to the Basilica/Shrine from our hotel. We didn't find it because there was a missing information on the driving direction so we ended up going to the Capitol and Washington Monument first. Afterwards, we tried to look for the Shrine again thru google text. We got some driving directions to the place but again was inaccurate so we got lost (where's our GPS when we need it?! :) We decided to head back to Baltimore concerned that we might miss our flight. As we headed back to Baltimore, I surrendered to the fact that we tried really hard to look for the Shrine and that maybe it was not meant to be. We found H/W 295 and started to head back to Baltimore. At one freeway junction, we were again unsure whether to turn left or right - followed my guts and turned left. After a few miles, guess what? ... yes, we found the exit towards the Shrine! I looked at my watch and realized we still have more than an hour to spare so I immediately headed towards the exit to go to the Shrine. Arcie told me later that she was praying intently for guidance so we can find the place.

I got a clear message from this simple incident - The Lord guides our path when we seem to have lost our way. And what was the conference theme? 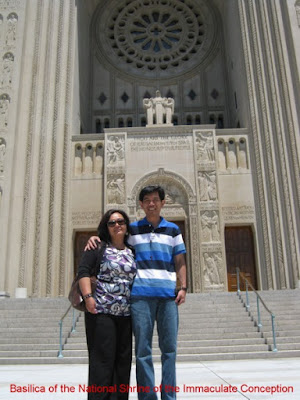 I've never been inside a Basilica before so this was such a great experience and a true blessing for us. I immediately felt (very strongly) that we were on holy ground once we entered the premises of the Basilica. It was a true blessing and awesome experience for Arcie and myself. Not just the Conference itself but also the little stories and miracles that came with it and we had quite a few. I'll share more at our next General Assembly. I plan to discuss with our governance team on how we may be able to send more delegates next year to New Jersey.

Thank you for your time in reading this email. Special thanks to Bro Medel and Sis Marlyn for helping us make it to this conference. Attached are some photos that we wish to share.

May God be praised and glorified in everything that we do!

Faithful Disciples
Seek the goodness of every person and encourage people to grow in their personal relationship with our loving God! Like to encounter Christ's love and mercy daily to live our lives to the fullest. Grateful for the people who touch and enrich us.